Sarajevo UNESCO City of Film participated at the AI-NURECC PLUS online conference on “Cultural and Creative Industries in the Adriatic-Ionian Region” that took place online on 1st December 2021. In line with the EU Strategy for the Adriatic and Ionian Region (EUSAIR), the conference brought together an excellent group of experts and stakeholders in the field of culture, creativity and innovation from the whole Adriatic-Ionian region to start a conversation about mapping the variety of Creative and Cultural Industries (CCIs) existing in the Adriatic and Ionian Region, exploring potential synergies and understanding the added value of CCIs for the region.

Sarajevo UNESCO City of Film Project Manager Natasa Kucera participated in the panel discussion covering the topic “Cities and Regions as Catalysts for the Development of the Cultural and Creative sector in the Adriatic-Ionian Region”, regarding the importance of giving a central role to culture and creativity in the development of urban systems, cultural districts and regions. Natasa Kucera presented the experience of Sarajevo, focusing on how the field of film contributes to Sarajevo’s urban development through film festivals and film and TV production, emphasizing the importance of bringing together public, private and civil sector.

Watch the full recording of the conference here: https://www.youtube.com/watch?v=AaJIdsS2EpU 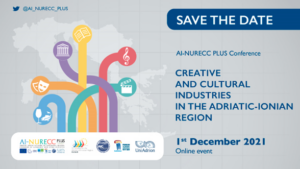 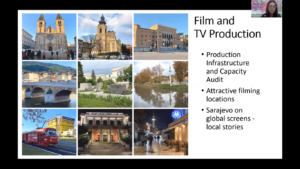 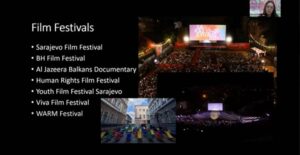