The Busan Inter-City Film Festival that celebrates the UNESCO City of Film Busan designation and fosters cooperation between Cities of Film within the UNESCO Creative Cities Network this year was organized both onsite and online due to the COVID-19 pandemic.

This year’s 4th edition of the Festival screened 17 diverse short films from UNESCO Cities of Film (Busan, Lodz, Sarajevo, Sydney, Valladolid and Yamagata) as well as opened the films to the public via its online platform on 6-12 December 2020.

Sarajevo was represented in Busan with five short films filmed in Sarajevo – IN YOUR HANDS (Šarović/Englehart), THE PACKAGE (Kasalica/Mihai), THE RIGHT ONE (Djukić/Tzafka), SPIT (Samardžić/Markowicz) and THE SIGN (Veninova/Rozenkier). 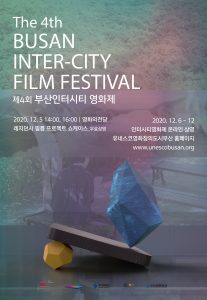