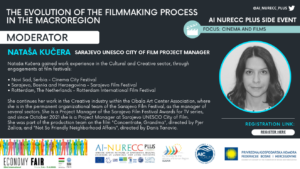 Sarajevo UNESCO City of Film participated at the AI-NURECC PLUS SIDE EVENT on “Creative and Cultural Industries in the Adriatic-Ionian Region” that took place in Mostar, on the 6th of April 2022.

In line with the EU Strategy for the Adriatic and Ionian Region (EUSAIR), the conference brought together an excellent group of experts and stakeholders in the field of film, creativity and innovation from the whole Adriatic-Ionian Region to start a conversation about mapping the variety of Creative and Cultural Industries (CCIs) existing in the Adriatic and Ionian Region, exploring potential synergies and understanding the added value of CCIs for the region, with the focus on the film industry.

With interventions from experts and representatives of the sector, this Side-Event explored more closely the audiovisual sector, with a special focus on cinema and films, with the aim of understanding how to make the sector more attractive at European and international level, therefore, how to support growth and job creation.

The discussion was very interesting and stimulating with great speakers: 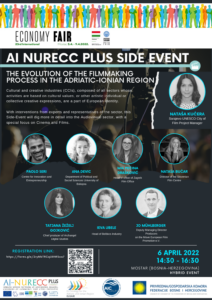