Sarajevo UNESCO City of Film participated at the Second Forum of UNESCO Creative Cities in Bitola, 25-28 August 2020, which was organized this year as a combined onsite and online event due to the COVID-19 pandemic. The forum brought together representatives of UNESCO Cities of Film as well as representatives of local institutions, NGOs and businesses working in creative industries.

On 26 August 2020, representatives of UNESCO Creative Cities of Film (Bradford, Busan, Lodz, Sarajevo, Rome and Terrassa) joined the forum online and shared their cities’ experiences and challenges in the time of the COVID-19 pandemic. The onsite panel discussion covered the topic Cities of the Future, focusing on why culture and creativity are a smart investment for cities.

“Becoming part of the UNESCO Creative Cities of Film opened new opportunities for the promotion and further development of the city. This also means new ideas for projects in different areas and worldwide cooperation. One of the goals of the forum is to contribute to a positive impact on the further development of culture and tourism, and thus the promotion of local economy”, said Vesna Ristovska from the Film Center Bitola, which hosted and organized the Second Forum, with the support of the North Macedonia Ministry of Culture. 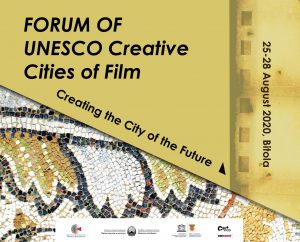